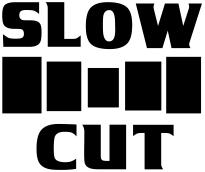 Cinema Noir For Your Ears

The music of Slow Cut stirs feelings that can be hard to name.
Picture a band looming in the corner of a table-dancing joint down at the red-light district of a mining colony somewhere at the outer rim of our galaxy, year unknown. Soundwaves reflect the doomed, dark & desperate environment with slow, sensual motion. Cinematic images of a distorted past come to mind, overlapping with a futuristic reality.

The need for intimacy fills the room like an opiate, a cry for the last remains of human resistance and desires, reflecting & despising the cold rational distance and nothingness of the outside surroundings at the same time. A pulp of hazy synthesizer drones and atomized sound particles, tuned to unearthly depths, fabricate the backdrop for a poetic but manipulated version of an almost forgotten heritage.

The earthy rawness of Blues and the faded, psychedelic colors of the shades of Jazz are present, as well as distant songs from the “Old World”, all delivered with an epic grandezza